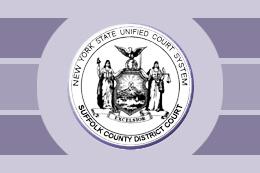 In New York State, a District Court has been established in the five western towns of Suffolk County, and in Nassau County. These state courts are separate from each other and are unrelated to the United States District Court.

The District Courts are the "local criminal court" and the "local civil court" for the municipalities they serve.

In 1993, that “central location” became the District Court Building of the Cohalan Court Complex in Central Islip (which also houses other state courts and county agencies). In Central Islip, judges hear criminal matters as a local criminal court, as provided in the Criminal Procedure Law (CPL). more info...

In 1998, First District Court Civil Division opened in Ronkonkoma, sharing the facility with Fifth District Court. In this courthouse, and the other four “outlying” courthouses, judges hear civil matters, small and commercial claims, landlord & tenant matters, and town ordinance offenses (which are prosecuted by the Town Attorney’s office in each of the towns). more info...