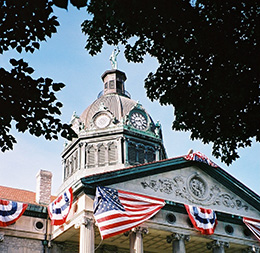 In County and Supreme Courts, the processing of a person who allegedly has committed a crime consists of three stages: arraignment, trial and (if convicted) sentence.

Indictments are handed down by the Grand Jury. As the jury of inquiry, the Grand Jury hears the evidence against the defendant presented by the prosecutor and decides if the evidence presented is sufficient for an indictment. The defendant may waive indictment by the Grand Jury and agree to be prosecuted instead by superior court information. With his attorney present, the defendant signs the written waiver in open court and thus consents that the superior court information submitted by the district attorney is to replace the indictment. The judge has to approve the waiver.

At arraignment, the defendant is read the charges against him that are listed in the indictment or the information. Accompanied by his attorney, the defendant pleads guilty or not guilty to the charge. The judge then adjourns the case to a future date for appropriate action.

After arraignment, the opposing attorneys may settle the case through negotiating pleas. That is, they agree on a guilty plea, which is acceptable to both the people and the defendant, without going to trial. The judge may accept the plea offered to the defendant, assuring himself that the defendant has knowingly and intelligently waived his right to trial. When the defendant has pled not guilty at arraignment, motions based upon various grounds may be made by the defense attorney. Motions are either denied or granted by court order. Hearings may be held upon any motion.

When the defendant waives his right to a jury trial and requests a bench trial, he is tried before the judge without a jury. Evidence is presented as in a jury trial, but the verdict is rendered by the judge.

Jury trials always begin with jury selection. After prospective jurors are summoned to appear in court, they are examined during voir dire by the judge first and then by the attorneys to determine their qualifications for jury service. After the jurors have been selected and sworn in, the judge delivers his preliminary charge, and the attorneys make their opening statements. The testimony of witnesses and other evidence is presented at trial by both attorneys. When one party calls a witness to the stand, the witness is sworn in and examined, then the opposing attorney may cross-examine the witness. After all testimony has been heard, the defense attorney states his concluding arguments to the jury. He is followed by the district attorney.