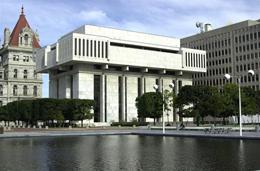 None of these decisions are available for publication in any official or unofficial reports, except the New York Law Journal, without the approval of the State Reporter or the Committee on Opinions (22 NYCRR 7300.1). The decisions on the database have not been edited by the State Reporter and are subject to revision should they appear in the Official Reports. With respect to officially reported decisions generally, please see the New York State Law Reporting Bureau's web site. Most Court of Claims decisions are not reported in the official reports and are available only in the Court of Claims database.

Scope of the Database

The database contains the full text of select trial and motion decisions of the Court of Claims from March, 2000 to date (the starting date for each judge varies). Most decisions of the court are contained on the database, the exceptions consisting primarily of very short decisions concerning the most routine of matters. We also provide the official citation for the few decisions that appear in the official reports, as well as information regarding the outcome of any appeal. While we attempt to be fully accurate and current with this information, the practitioner should always verify the appellate status of any decision intended to be relied upon by using Lexis, WestLaw or a similar service.