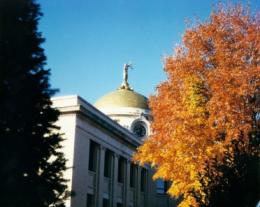 Madison County is an upstate rural county. Until the 1780's, Madison County was part of the vast, unchartered wilderness of central and western New York known as "Tryon", later renamed Montgomery County. This area belonged to the Six Nations of the Iroquois, with the area of Madison County occupied primarily by the Oneida Nation.

Madison County became a part of Herkimer and Tioga Counties when Montgomery County was divided in 1791. It then became a part of Chenango County from 1798 until March 21, 1806, when it was set off as a separate entity. Named for President James Madison, the county was first made up of five towns.

For the first four or five years, Madison County did not have a county seat. Court proceedings were held in schoolhouses, barns and taverns. Cazenovia became the first county seat in 1811, with the courthouse being built on Seminary Street. A duplicate design of the building now stands on its original site and is part of the Cazenovia College Campus.

In 1815 there was a legislative act which repealed the previous law of 1810. A new courthouse was built in the next county seat of Morrisville and court was held there starting October 7, 1817. The first Morrisville Courthouse was demolished in 1847-1849 and a new one erected on the same site. In 1864 the courthouse was destroyed in a fire, but its foundation was used for the base of the 3rd courthouse in Morrisville.

The demographics of the county changed with the coming of the Erie Canal. The northern part of the county grew. Canastota had the canal and the New York Central Railroad which came through in 1839. Oneida also had the benefits of the railroad. Morrisville was south of the Erie Canal and west of the Chenango Canal and when the Midland Railroad came through in 1869 it bypassed Morrisville.

For the next twenty years, the matter of changing the county seat was brought before the Board of Supervisors many times. During this time, County and Supreme Court judges held various terms of court in Oneida and Canastota. In 1896 the Town of Lenox was split into the Towns of Lenox, Lincoln and Oneida.

In a special session of the Board of Supervisors in 1900, Canastota, Oneida, Earlville, and Cazenovia were all trying to win the vote for the County seat. The suggestion was made for Wampsville as the seat. At the vote none of the contenders was able to carry the floor and the County Seat remained in Morrisville.

In the meantime, Oneida expanded its western border and incorporated into a city. Finally, Canastota and Oneida began working together to get the seat away from Morrisville. In 1907, Wampsville got enough votes to become the county seat. James Gordon was selected as the architect for the new courthouse which was built on donated land running along what is now North Court Street. Visitors will note that the Courthouse does not face the street. They did not want the back door of the Courthouse to be turned toward Oneida and it had been thought that a boulevard would eventually follow the third rail route, which the Courthouse faced. This did not happen. The Courthouse was ready for use in 1910.