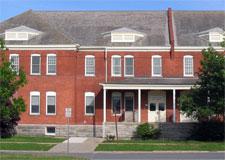 Plattsburgh has had a City Court since 1902. Before that, Plattsburgh was a Village with a "Recorder's Court" for criminal and civil cases. The old docket books have been kept in very good condition all these years in the City Court Chambers. Murders, hangings in Plattsburgh and other crime in North Country history can be found at the New York Correction History Society website. Information about notable judges from the North Country can be found at The Historical Society of the Courts of the State of New York. Look for Court of Appeals Judges Samuel Hand and Henry T. Kellogg, or Judge Reuben H. Walworth, who presided over the Peggy Facto murder trial in 1825 and later was the last Chancellor of the State of New York.

Plattsburgh City Court has been held in the City Hall since 1927. On February 17, 2004 we moved into a beautiful building which was built in 1896 as a Barracks for the US Army Post in Plattsburgh. Soldiers who lived here fought in Cuba in the Spanish American War in 1898 and in the Philippines in 1899. President McKinley visited the Plattsburgh Barracks when he spent the summers of 1897 and 1898 at the Hotel Champlain in Cliff Haven. President Taft reviewed the troops here in 1909 as part of the Tercentenary Celebrations of the Discovery of Lake Champlain.

There were Civilian Military Training Camps, including the Businessmen's Training Camps, here in 1915 and 1916. Teddy Roosevelt visited in August 1915. The movement for civilian military preparedness became known as "The Plattsburgh Idea", and led to the establishment of ROTC [Reserve Officer Training Corps]. The Plattsburgh City Court Lobby displays a permanent exhibit of photographs and text on this period.

Plattsburgh Barracks continued as an Army Post until the mid-1940's. During 1944, it was turned over to the US Navy and became Camp MacDonough for a Navy Officers Training Camp. This was followed by the US Army Air Force Convalescent Hospital in 1945.

From 1946-1953 the buildings on the US Oval were used by the State of New York for Champlain College. To meet the needs of returning World War II veterans, the state established five Associated Colleges of Upper New York (ACUNY), including Champlain College at the former Plattsburgh Army Barracks. In 1950, the ACUNY colleges became part of the SUNY system.

By 1953, the Champlain College enrollment had dropped considerably, and the US Government was interested in taking the property back for an Air Force Base. The Plattsburgh Air Force Base was active from 1954 until its closure in 1995.

The United States Congress approved money to build Plattsburgh Barracks in 1893. The first barracks was completed in 1894, and two others in 1896.