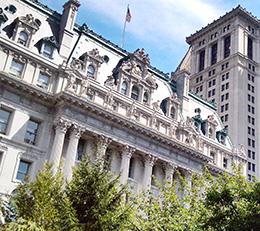 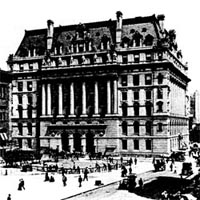 Surrogate's Courthouse is located on the northwest corner of Chambers and Centre Streets in downtown Manhattan and houses the Court of the same name. The Surrogate’s Court/Hall of Records is one of the finest public buildings in New York. The Beaux Arts style masterpiece is a major example of the early 20th century City Beautiful movement in the civic center, along with the Municipal Building and the New York County Courthouse. The idea behind the City Beautiful movement was to transform cities with spectacular, imposing classical buildings, fine artwork, and broad boulevards. The intention was to provide an uplifting experience for the community. The Surrogate’s Court, with its ornate granite facade and opulent marble interior, still makes people feel good about the city. The building was originally designed for use as a Hall of Records and this was its original name. The Surrogate's Court was one of the original tenants, with courtrooms, offices and chambers on the 5th floor. The building was renamed the Surrogate's Courthouse in 1962.

Planned since 1888 for use as a Hall of Records and home to Surrogate's Court, it took eight years to build, from 1899 to 1907, and cost more than seven million dollars. It was designed by John R. Thomas, a respected and prolific architect who was said to have been responsible for more public and semipublic buildings than any other architect in the country. Thomas adapted his prize-winning design for a new City Hall which was never built. When he died, the Tammany Hall architects Horgan & Slattery took over. The building replaced the old Hall of Records in City Hall Park.

Built of Hallowell, Maine granite, the seven-story, steel-framed structure was intended to be a fire resistant storehouse for the City's records. The front of the building has a triple arched entrance with eight, thirty-six-foot high granite Corinthian columns above. A tall mansard roof caps the facade. The grand marble staircase in the first floor rotunda reflects the architect's appreciation of the Paris Opera House. Philip Martiny and Henry Kirk Bush-Brown, both respected, prize-winning sculptors, produced the 54 sculptures on the exterior. The statues represent allegorical subjects such as Philosophy and Law, as well as the seasons. The Philip Martiny sculptures on Chambers Street represent figures in New York City history, including DeWitt Clinton and Peter Stuyvesant. Praised muralist William DeLeftwich Dodge created the mosaic murals on the interior depicting the signs of the zodiac. The ornate courtrooms are decorated in gilded plaster and carved wood paneling in Santo Domingo mahogany and English oak. Other lavish interior decoration includes chandeliers and detailed bronze door knobs. An enclosed courtyard in the interior of the building extends from the first to third floors with a skylight on the fourth floor.

It was popular as soon as it was built, appearing in all the guidebooks of the period, and is one of the most cherished buildings in the city today. It has suffered few damaging alterations over the years and is remarkably intact. The interior is a popular site for filming and can be seen in dozens of movies and commercials. It is a designated New York City exterior and interior landmark and is listed on the National Register of Historic Places.