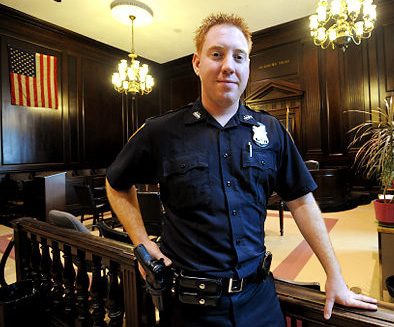 Court Officer Michael Marelli made it to the top 10 on the History Channel's 'Top Shot' reality show for gunslingers.

A Queens court officer has a shot at bagging the top prize in a reality TV competition for sharpshooters.

Queens Supreme Court Officer Michael Marelli's pistol prowess got him a spot on "Top Shot," a History Channel reality competition where 16 gunslingers battle for a $100,000 prize.

Marelli was so confident in his shooting abilities, which earned him state awards for shotgun shooting, he took six weeks' unpaid vacation.

"I was in the show as a New York State court officer - there's a lot of pressure on my shoulders," said Marelli, 28, who has never drawn his gun in four years at work.

His bravado faded when he met his competition: ex-Navy SEALs, firearms instructors and Homeland Security agents.

"Once I got in and saw what I was up against, I knew it was going to be tough," the Port Jefferson Station, L.I., native said.

So far, he has made his colleagues proud, securing a spot in the top 10 after surviving a sixth week of challenges Tuesday.

Marelli credits his steady trigger finger to his academy training and his grandfather, Alvin, who started teaching him how to shoot at age 12.

"I wanted to show him that I took all the skills he taught me and retained them," Marelli said.

The elder Marelli, an 80-year-old Korean War veteran, said he put his grandson through the "rigors" during those early lessons.

"He had to shoot with me like we were in the military," Alvin Marelli said. "I taught him the basics. He did it himself. I'm very proud of him."

When Michael Marelli was chosen for "Top Shot," the two ammunition aficionados trained together obsessively - just as they did more than a decade ago.

Marelli, the self-proclaimed "goofball" of the show, said he gets recognized daily by lawyers, clients and even children in the chambers.

But Marelli's newfound fame hasn't stopped his fellow court officers from poking fun at him.

"They definitely tease me, but I know deep down they're proud of me," he said.

Marelli will continue his quest for the $100,000 purse next Tuesday at 10 p.m. on the History Channel.

Neither the station nor Marelli disclosed whether he hits the bull's-eye and takes home the money.

However, Marelli said the experience - which included everything from throwing tomahawks to firing state-of-the-art assault rifles - has been gratifying.

"It's any gun buff's wildest dream. It's definitely an experience I'll never forget," he said.