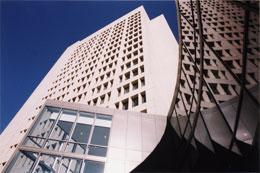 On March 12, 1773, a courthouse and jail were erected in Goshen. Originally it was two stories high. It was plain and without a belfry and its only ornamental features were two windows larger than the others and arched, one over the front door on the north side and the other on the south side. Later on, the building was changed by the addition of a third story, cupola and bell. In 1842, two new courthouses, one in Newburgh and one in Goshen were opened, as well as a jail in Goshen. This was following nine years of debate in the county's Board of Supervisors. The courthouse in Goshen was used full time for over 130 years until the new County Government Center was built in 1970. This new building was a modern, cube-like arrangement of concrete and glass which was said to be one of the most functional office buildings in the state at that time. In 1970, the Newburgh courthouse was closed, making Goshen the single county seat. In 1998, expansion began of the Orange County Court. This new addition rose behind the Government Center. This expansion included additional courtrooms, rooms for hearing officers, a nursery for Family Court, and a holding area for inmates.