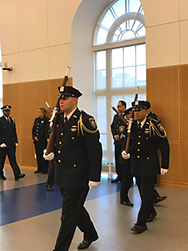 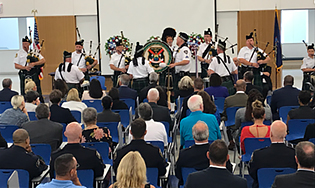 This year marks the eighteenth anniversary of the September 11th attacks which took place in New York City, Washington D.C. and Shanksville, Pennsylvania. Two thousand seven hundred and fifty-three people died at the World Trade Center including three of our own court officers. This year’s commemoration marks the first time the ceremony took place at the “new” New York State Unified Court System Captain William H. Thompson Sergeant Thomas Jurgens and Sergeant Mitchel Wallace Court Officers Academy in Crown Heights, Brooklyn. The academy is named in honor of the three Court Officers who sacrificed their lives to help others that day.

Members of the Unified Court System Honor Guard along with The New York State Courts Pipes and Drums took part in the ceremony which included a taped message from Chief Judge Janet DiFiore. She said the sacrifice of the fallen Court Officers will never be forgotten and went on to praise Court Officers throughout the State of New York who ensure the safety of all those who visit our courthouses every day. 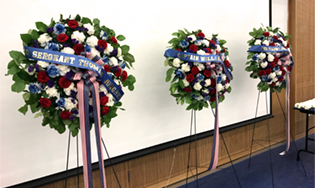 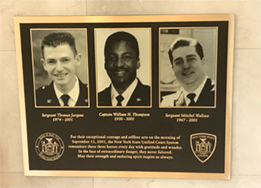