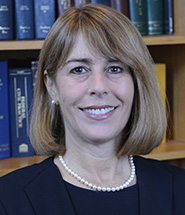 Hon. Gretchen Walsh, J.S.C. sits in the Commercial Division and the Matrimonial Part of the New York State Supreme Court, Westchester County. Justice Walsh was elected in November 2015 and assigned to preside over the Environmental Claims Part ("ECP") of the Ninth Judicial District and a Civil Trial Part in Supreme Court, Orange County. In 2017, she was transferred to the Matrimonial Part in Westchester County and continued to preside over the ECP.

Justice Walsh was the Principal Court Attorney to the Hon. Alan D. Scheinkman, J.S.C. and Administrative Judge of the Ninth Judicial District (2008-2015), where she assisted Justice Scheinkman in the resolution of cases assigned to the Commercial Division, Westchester County. In addition to her duties as Principal Court Attorney, she presided over disciplinary hearings and helped to develop the E-Filing Protocols for Westchester County's NYSCEF Program. Justice Walsh was formerly Deputy Counsel, Office of Court Administration, where her responsibilities included training hearing officers in the Small Claims Assessment Review Program and serving as Counsel to the Commercial Division Focus Groups, which culminated in the Report to the Chief Judge on the Commercial Division Focus Groups (July 2006). She was also the Principal Court Attorney/Special Counsel to the Hon. Jonathan Lippman, then Chief Administrative Judge, and Principal Court Attorney to the Hon. Mary Smith, J.S.C. In 2014, Justice Walsh received the Joseph F. Gagliardi Award for Excellence for her distinguished service in the court system.

Prior to her joining the court system, Justice Walsh was a commercial litigator at Kelly Drye & Warren LLP in New York City (1987-2002).

Justice Walsh received her J.D. from Fordham University Law School and her undergraduate degree from SUNY Stony Brook (Phi Beta Kappa). At Fordham Law School, she was the Commentary Editor for the Fordham Urban Law Journal and is the author of a Note in that Journal (1986). She was admitted to practice law in New York and New Jersey (1988) and the United States District Courts for the Southern and Eastern Districts (1988).