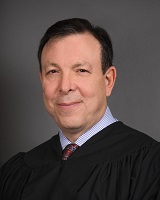 Judge Joel M. Cohen was appointed to the Court of Claims by Governor Andrew Cuomo in June 2018 and was designated an Acting Supreme Court Justice in New York County by Chief Administrative Judge Lawrence K. Marks. He was assigned to the Commercial Division, New York County, as of January 1, 2019.

Judge Cohen was a litigation partner at Davis Polk & Wardwell LLP from 1996 until June 2018, prior to which he was an associate at the firm and, earlier, a law clerk for Judge Thomas A. Clark of the United States Court of Appeals for the Eleventh Circuit. In connection with pro bono representations in private practice, he was a recipient of the Thurgood Marshall Award from the Association of the Bar of the City of New York for the successful representation of a death row inmate and a Pro Bono Achievement Award from Sanctuary for Families for the successful representation of a domestic abuse survivor seeking alimony and child support benefits.