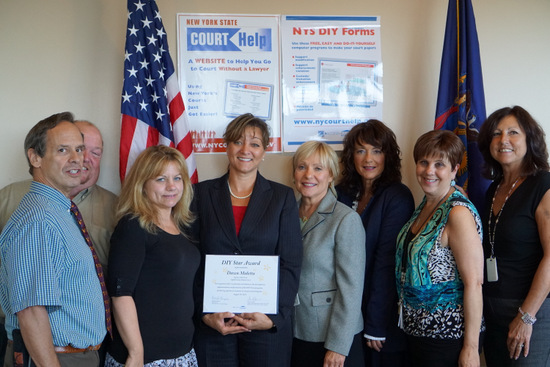 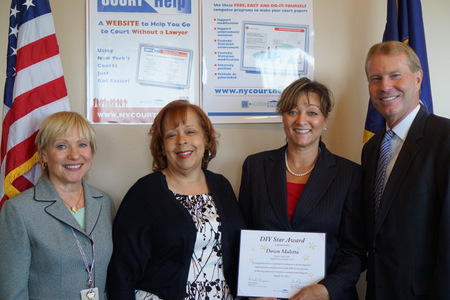 Dawn contributed to the overall promotion of DIY Form programs when she produced the Alternative DIY Instructions for Family Court. In 2013, she noticed that litigants in her court needed additional assistance in logging into and out of the programs. In direct response to this need, she and her staff created new work station signage that not only assisted the public in using the program but freed up court staff to attend other matters. This poster is now used in Family Courts statewide to assist DIY Form users.

Dawn furthered her commitment to assist unrepresented litigants with the creation of the “DIY Center” at the Central Islip Family Court location. She established the protocol whereby people could fill out their forms on one of two computers that afforded privacy and dignity, which would then print out directly to the clerk’s office. Decorated with court posters and postcards, her office even developed an individualized postcard to direct the public on what to do next. Dawn then shared her court’s experiences with DIY Forms in the April 2014 “How DIY Programs Can Increase Court Efficiency” webinar for upper management level court employees. Presenting on “Inside the Courthouse: Signage, Spacing, and Individual Initiative,” Dawn explained which techniques worked to encourage DIY usage in your courthouse.

This summer, Dawn continued her efforts to assist the unrepresented by having various Suffolk County Family Court summer interns assist the public in the DIY Center. From her idea to include DIY cards with every order to encouraging court staff to embrace the programs, she has made DIY Form programs a part of her court’s culture. Dawn contributed to DIY Form Programs in a variety of ways from the creation of the new statewide promotional materials, to speaking in webinars about how DIY Form programs has assisted your court, to the creation and implementation of a “DIY Center” at the Central Islip Family Court. Her efforts have furthered access to justice for unrepresented litigants both in Suffolk County and the rest of the state, making her a true DIY star! 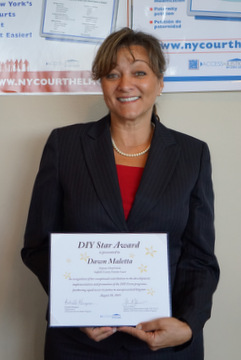 After hearing several speeches extolling her praises, Dawn took the podium and expressed her appreciation for the DIY Star Award, stating that she could not have won without the support of her Chief Clerk Terry Matyszczyk and her amazing coworkers, Patrick Gillen, Debra Mirabella, Steve Safonte, Barbara Siar, Phyllis Masarik, Elizabeth Vanderhoef, Lou Pelosi, Linda Beggins and former employee, Katherine Sexton. Dawn accepted her award amidst rousing applause and cheers from Suffolk County Family, Supreme, and Help Center staff. Following the ceremony, a reception sponsored by the Suffolk County Family Court was held to celebrate Dawn’s achievement.

"This program and format really made it easy to complete the necessary forms." - Support Modification Program, June 8, 2015

"It made the process much easier. " - Support Modification Program, February 17, 2015

"This program and format really made it easy to complete the necessary forms. " - Support Modification Program, December 10, 2014

"This program was extremely helpful and easy to navigate through." - Custody Modification Program, June 19, 2014

"Your employees were very nice and helpful." - Support Modification Program, May 21, 2014

"Any and all step by step programs help very much, considering how stressful the family court process already is, and not being able to have a lawyer " - Support Modification Program, March 3, 2014