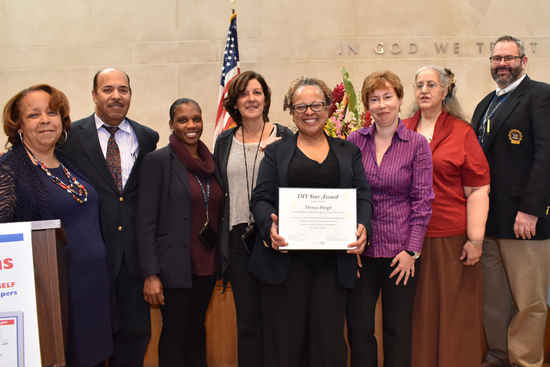 NYS Courts Access to Justice Program Director Hon. Fern A. Fisher, Administrative Judge of the Queens Supreme Court Jeremy S. Weinstein, Supervising Judge of the Queens Civil Court Joseph Esposito, NYC Court Chief Clerk Carol Alt and NYS Courts Access to Justice Program Chief Counsel Rochelle Klempner all spoke about the many ways that Monica Dingle and the Queens County Special Term Clerk’s Office Name Change Staff have promoted the DIY Form Programs as well as the recipients’ outstanding efforts in furthering equal access to justice for all unrepresented litigants. Monica accepted her award and the award on behalf of her staff and praised both her colleagues and the DIY Form programs. She shared her own personal story about the time she needed to file a voluntary administration proceeding in the Surrogate’s Court for her father’s estate. Monica described how grateful she was to be able to use the free and easy Small Estate DIY Form program to make her court papers. 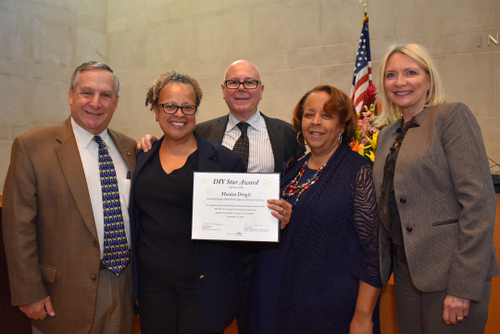 Immediately following the award presentation, a reception was held featuring two cakes with images of the front and back of the Civil Court DIY Form Program postcards printed on top (see Photo Gallery).

The Queens County Civil Court Special Term Clerk’s Office Name Change Staff DIY Star winners include: Associate Court Clerk Natalia Kachkarov, Senior Court Clerks Carol Manzo, Orlando Pineiro, Thomas Vahey, and Hellen Williams and Court Assistant Louise Walton. The Staff earned this honor primarily due to their promotion and usage of the Adult and Child Name Change DIY Form programs. Between 2015 and 2016 program usage jumped from 50% to nearly 90%. UCMS records indicate that in the first three quarters of 2016, the staff filed a total of 757 adult and child name change petitions made with the DIY Form programs, with only 114 made using paper forms or filed by attorneys. User surveys statistics indicate that the majority of these filings were made by unrepresented litigants utilizing the public access DIY terminals set-up in the Special Term Clerk’s Office. Surveys also contain many comments praising the level of customer service received from the staff. A sample of the User Survey comments can be read below. 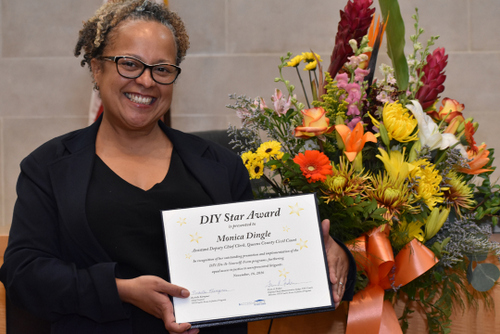 This is the second time that Monica’s actions have created a lasting change in court culture and work environment. In 2012, Monica implemented a triage system and express lanes in the Queens County Civil Court Clerk’s Office that vastly improved customer service and usage of the Consumer Debt Vacate Default Judgment DIY Form program. The staff was recognized with a Star Award. Monica has also assisted the Access to Justice Program with webinar and live trainings for court staff on DIY efficiency. As Justice Fisher stated, “Monica Dingle is a DIY Star. I am delighted to be able to thank and honor her before her retirement from the court system.”

Read a sampling of what litigants had to say about their DIY experience in 2016 in the Queens County Civil Court.

"AWESOME SERVICE: The staff are very patient and professional in dealing with people." October 21, 2016

"It was a wonderful experience and helpful. Court Clerk helped and clear on instructions. " May 19, 2016

"The staff was nice and very helpful. The program on the computer was very self-explanatory." May 4, 2016

"Thank you so much for the staff and computerized system. Very convenient and time saving."March 30, 2016