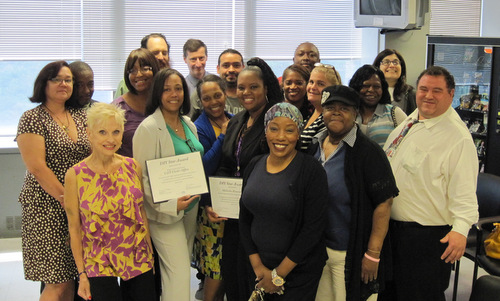 NYS Courts Access to Justice Program Director Judge Fern A. Fisher, Supervising Judge of Kings County Housing Part Jean Schneider, Chief Clerk of the Civil Court Carol Alt, and Chief Counsel to the NYS Courts Access to Justice Program Rochelle Klempner all spoke about the recipients’ outstanding efforts furthering equal access to justice for unrepresented litigants. Judge Fisher presented the awards and then surprised everyone with one more DIY Star Award for Lydia Grima, who retired from the court system in April 2014. Following the award presentation, guests were treated to cake provided by the Civil Court.

Melinda Alexander earned the DIY Star Award for her valuable contribution to the development, implementation and promotion of the DIY Form programs. Melinda contributed to the development of the programs by testing early prototypes and providing feedback for improvements. Melinda has been key in integrating the DIY Form programs into the L&T Clerk’s Office’s daily procedures. Unrepresented litigants are triaged from the start and sent to the DIY terminals whenever appropriate (thank you, Kenny). When the litigants complete the programs they go directly to an express window for filing. As evidenced by the User Survey comments, this efficient use of the DIY Form programs has greatly decreased litigant wait time. Melinda has also assisted the NYS Courts Access to Justice Program with the promotion of the DIY Form programs by training community groups and court staff. Melinda’s efforts are greatly appreciated. 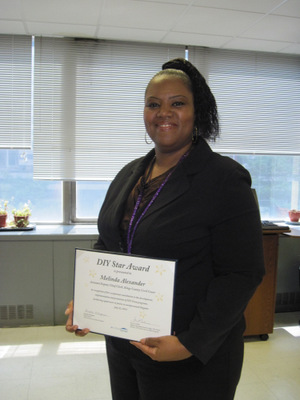 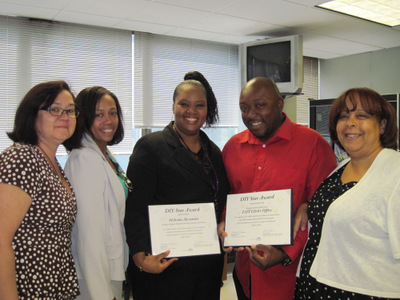 In addition to the Kings County Civil Court winners, Judge Fisher presented a special DIY Star Award to Lydia Grima. Judge Fisher spoke about how leadership comes from the top on down and how Lydia's management and vision made the implementation of DIY Forms a priority in the courthouses where she served as the Clerk of the County. Lydia’s contribution is proven by the fact that over the past three years, two of the New York City Civil Courts where she was the Clerk of the County were chosen out of the entire state to receive DIY Star Awards for their assistance to unrepresented litigants through the use of the DIY Form programs. Judge Fisher stated that, "although Lydia recently retired from the court system this ceremony would not feel right if she was not here to share in this honor." Lydia received a standing ovation from the 75+ guests at the ceremony. 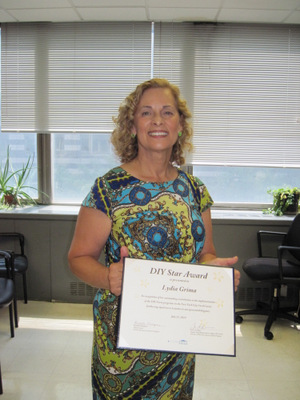 "I found it to be helpful and it saved me time in the clerk's office." - NYC Tenant Restore to Calendar Program, June 16, 2014.

"It definitely helped speed up the process and makes you have a more 'hands on' feel for your case." - NYC Tenant Restore to Calendar Program, April 24, 2014.

"The computer is faster and easy to understand. It was very helpful." - NYC Tenant Restore to Calendar Program, April 4, 2014.

"Extremely helpful and saved me time. I am working and this helped me out. Thank you." - NYC Tenant Restore to Calendar Program, March 31, 2014.

"Court Clerk Mr. Yehuda Y. Hirsch was extremely helpful and very friendly. He eased my anxiety and made me smile and breathe. I appreciate his kindness and camaraderie." - NYC Tenant Answer Program, March 12, 2014.

"I enjoyed using the computer because it makes the process go quicker and leaves more time for others who are not yet comfortable using the DIY program." - NYC Tenant Affidavit Program, February 13, 2014.

"The court employee was very helpful and she assisted me with all the questions. " - NYC Tenant Restore to Calendar Program, February 2, 2014.

"I found that the computer method was more helpful and easier to use. Thank you very much for the opportunity to use that format." - NYC Tenant Affidavit Program, November 13, 2013

"It's a great program to help landlords who can't afford an attorney. Thank you." - NYC Small Property Owner Program, September 11, 2013.

"Instead of sitting and waiting, I felt more comfortable and at ease utilizing the DIY with my guide." - NYC Tenant Affidavit Program, July 29, 2013.

"The young lady who helped me was very informative, polite and courteous. I actually enjoyed using the computer to shorten my stay." - NYC Tenant Restore to Calendar Program, July 22, 2013.

"I am very thankful for the help with this form on the computer. Ms. Alexander was courteous and saved me time." - NYC Tenant Affidavit Program, June 17, 2013.

"This system saved time and I believe will assist others in the future. Very nice improvement." - NYC Tenant Restore to Calendar Program, May 13, 2013.

"I appreciated being informed that the computer was an option. I found it easy to use and informative." - NYC Tenant Restore to Calendar Program, January 8, 2013.