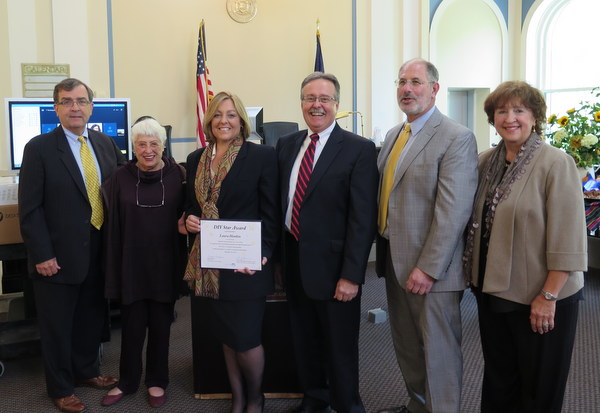 On September 29, 2016, Laura Hankin became the first law librarian in New York State to win the prestigious New York State Courts Access to Justice Program DIY Star Award. A ceremony was held at the Columbia County Courthouse where Laura assists patrons in the Supreme Court Law Library/Court Help Center. There was a large turn-out to support Laura, including Hon. Thomas A. Breslin, Administrative Judge for the 3rd Judicial District and District Executive Beth Diebel, Esq. Judge Breslin offered his praise for Laura and read a letter of congratulations from Principal Law Librarian Laura Barber. The Honorable Jonathan Nichols spoke about Laura’s dedication, followed by the Honorable Richard Mott’s Law Clerk, Jan Perlin, who read a letter from Judge Mott congratulating Laura on behalf of the Columbia County Supreme Court Law Library Board of Trustees. Surrogate’s Court Chief Clerk Teresa Slemp, who nominated Laura for the award, also spoke about Laura’s commitment to her patrons. The award was presented on behalf of Justice Fern Fisher by NYS Courts Access to Justice Program Special Counsel for Program Initiatives, Lisa Zayas. With thanks to Supreme Court Chief Clerk David Cardona, Access to Justice Program staff and many of Laura’s fellow librarians from around the state were able to watch the ceremony via Skype. 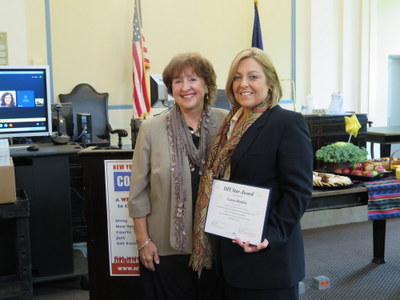 Recipients of DIY Star Awards are individuals who are critical in creating lasting change in court culture and work environment. Recipients are selected based upon an analysis of DIY Program usage statistics and a review of nominations received. Teresa Slemp’s nomination explained Laura’s ability to not only anticipate the needs of unrepresented litigants but to also work patiently with them. Teresa also described Laura’s contributions that led to the successful establishment of the Columbia County Help Center and the implementation of DIY terminals in the law library. Laura has worked with the Access to Justice Program in various ways, including attending DIY and Help Center webinars, participating in DIY developer’s groups, contributing to the DIY staff testimonials page, assisting in public library outreach, and helping to incorporate the NYS Courts Access to Justice Program’s resources into the annual Law Librarian Association meetings. It is clear that Laura is passionate about providing equal access to justice for all people. It is because of her passion, that she has helped to further equal access to justice for unrepresented litigants in Columbia County. 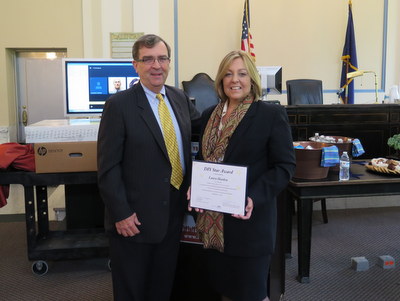 Following several speeches congratulating Laura on her achievement, Laura took the podium and expressed her appreciation for her nomination, the DIY Star Award and also for the DIY Form Programs that are available for unrepresented litigants. Laura stated: “I have seen pride and accomplishment in people who came to the library not knowing what to expect, but the opportunity to see the empowerment, control and autonomy DIY programs provide to unrepresented litigants is an extraordinary experience. I am honored to play a part in it.” Following the ceremony a lovely reception was held in the Surrogate’s Courtroom in celebration of Laura.