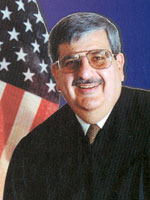 Prior to assuming judicial office, Judge Borrelli had served for nearly 23 years as the Assistant Director, Education and Training at the New York State Unified Court System. In that capacity, Judge Borrelli was responsible for the development and implementation of continuing judicial education and continuing legal education initiatives for the state’s 1100 state-paid judges and Justices, 2200 Town and Village Justices as well as hundreds of Law Clerks, Court Attorneys, Family Court Support Magistrates and others who served in legal titles in the Unified Court System. Judge Borrelli also served as Staff Counsel to the UCS Advisory Committee on Judicial Ethics, on the Judiciary/Agency Coordinating Committee, the City and District Court Operations Manual Committee, the Town and Village Justice Software Review Committee and with the City, Town and Village Courts’ Resource Center.

Judge Borrelli received a BA from Manhattan College (1973) and a Juris Doctor degree from New York Law School (1976). He was admitted into the New York Bar in 1977, the Bar of the District of Columbia in 1979 and is also admitted to practice in various federal courts including the Supreme Court of the United States.