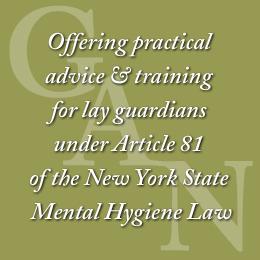 The process begins with the petitioner who sends a request for the appointment of a guardian to the court.  A petition is the written request that states the reasons why a guardian is needed for a vulnerable person.

The Petitioner is the person who starts the guardianship process by asking the court to appoint a guardian for someone else.  A petitioner can be a relative or friend of a vulnerable person, or an institution like a hospital, nursing home, or Adult Protective Services.

The petitioner must be able to prove that a guardian is needed.  Petitioners often ask a medical expert to offer information that shows the vulnerability of the person who needs a guardian.

A Medical Doctor, Psychologist, or Psychiatrist provides information in which the expert describes the condition of the person who needs a guardian.  These experts may be asked to testify at the hearing.

Once the petition has been received by the court, a hearing will be scheduled and a Court Evaluator will be appointed to meet with the person who needs a guardian and to decide if the statements that are written in the petition are true.

The Court Evaluator can be a lawyer, social worker, nurse, or another professional who is familiar with the particular condition of the person who needs a guardian.  The Court Evaluator is sometimes called the “eyes and ears” of the judge—his or her job usually ends at the time a guardian is appointed.

The Court Evaluator is appointed to read the petition, interview the “Allegedly Incapacitated Person,” and explain to the person why the court is considering a guardianship for him or her.

The Allegedly Incapacitated Person is the person who the petitioner believes needs a guardian. This person is sometimes called “the AIP” by court personnel.  The person is called “allegedly” incapacitated because a judge has not yet decided whether the person really is in need of a guardian.

Because guardianship reduces the freedom of the Allegedly Incapacitated Person, a lawyer can be appointed at his or her request to argue that a guardian is not needed.

The Justice of the Supreme Court is the judge who conducts guardianship hearings.  Lawyers sometimes refer to the judge as “the court.”

Once the judge has decided to appoint a guardian because the Allegedly Incapacitated Person needs one to take care of his or her affairs, the word “allegedly” is no longer used and from that moment on the person is called the “Incapacitated Person.”

The Guardian’s job is to care for the Incapacitated Person in just those areas in which the judge has decided the individual needs help. The Guardian may be a relative, friend, or professional, or the guardian may be a public or private organization.

Generally, a guardian is appointed for Personal Needs or Property Management.  The judge may appoint the same person for both jobs or two different people to do each one of the jobs.  In some situations the judge may also appoint two people as co-guardians who then must work together to manage the affairs of their ward. The judge also has the option to appoint a “standby guardian” to take over automatically if the original guardian can no longer carry out his or her duties or has died.

The Court Examiner reviews all reports submitted by the guardian.  He or she makes sure that the guardian is taking care of the incapacitated person’s affairs, according to the judge’s orders.

The County Clerk keeps all legal files and reports on guardianship cases in the court house. Part of the County Clerk’s office job is also to explain court rules, refer guardians to other offices and people, and provide forms and instructions.