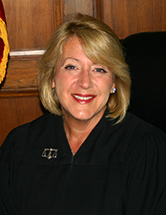 Justice Linda S. Jamieson currently sits in a Civil Trial Part and the Commercial Division of the Supreme Court. She was elected as a Justice of the Supreme Court in November 2002. Following her election, she was assigned to an Individual Assignment Part, where she presided over a variety of cases, including but not limited to, torts, real estate, commercial, employment discrimination, medical malpractice and contact disputes. In June 2006, Justice Jamieson was assigned to a dedicated Matrimonial Part where she sat until 2010. Prior to her election to Supreme Court, Justice Jamieson was appointed by the Governor as a Family Court Judge in Westchester County. She was subsequently elected to that position, serving a total of six years there.

Justice Jamieson earned her Bachelor’s Degree from Hofstra University and her Juris Doctorate from the Pace University School of Law. She is admitted to practice law in the States of New York, Connecticut, New Jersey and Florida, as well as in the United States Supreme Court and the United States District Courts for the Southern and Eastern Districts of New York. Prior to taking the bench, Justice Jamieson was in private practice for 20 years as a trial attorney.