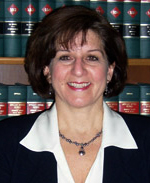 The Honorable Deborah H. Karalunas obtained a Bachelor of Arts degree from Cornell University in 1978 and graduated cum laude from Syracuse University College of Law in 1982. At the College of Law, Karalunas was a member of the International Law Review, Moot Court and the Justinian Honor Society. Following law school, Karalunas clerked for United States District Court Judge Howard G. Munson in the Northern District of New York. In 1983, Karalunas joined the law firm of Bond, Schoeneck & King in Syracuse, New York where she later became a partner. In 2002 Karalunas was elected to serve as a Supreme Court Justice in the 5th Judicial District. She presides over a panoply of civil cases including commercial, personal injury, medical malpractice, intellectual property, constitutional and environmental. In 2007 Karalunas was appointed Presiding Justice of Supreme Court, Commercial Division, Onondaga County. Karalunas also serves as Chair of the 5th Judicial District Women in the Courts Committee and the 5th Judicial District Library Board.

Justice Karalunas is an active member of various bar associations. In addition to service as chair of several committees and sections, she served on the Board of Directors of the Onondaga County Bar Association and the Central New York Women’s Bar Association. Justice Karalunas was the President of the Central New York Women’s Bar Association and Presiding Member of the Judicial Section of the New York State Bar Association. She currently serves on the Onondaga County Bar Foundation, and she is the 2nd Vice President of the Association of Justices of the Supreme Court of the State of New York. Karalunas lectures frequently for state and local bar associations on many substantive law and trial practice topics. She also teaches New York Civil Practice and is a regular guest speaker, lecturer and moot court judge at Syracuse University College of Law. Karalunas is the Editor of the Judicial Dispatch and the author of a chapter in the treatise Commercial Litigation in New York State Courts. Justice Karalunas lives in Jamesville, New York with her husband, George. They have three children, Sarah, Evan (Samantha) and Brian, and two grandchildren, Julian and Alina.