Biography of Justice Stephen A. Bucaria 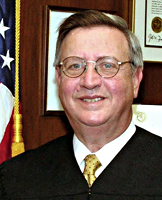 JUSTICE STEPHEN A. BUCARIA graduated from Fairfield University in Connecticut in 1970, wherein he received a B.A. In 1971, he received his M.A. in Criminal Justice from SUNY - Albany. He received his J.D. from Hofstra University in 1976. Prior to his election to the Bench, Justice Bucaria served in both the public and private sector.

From 1971 through 1976 he was Legislative Assistant to Senator John R. Dunne. Upon his graduation from Hofstra Law School he served in the office of the District Attorney, Nassau County. From the years 1979 - 1987 he was in the private practice of law where he focused primarily on Surrogate, Real Estate and Complex Commercial litigation. In 1987 he became a Law Secretary to the Hon. Gabriel Kohn of the New York Court of Claims, and then he became Law Secretary to Hon. Angelo D. Roncallo, Justice of the Supreme Court. In 1993, Justice Bucaria was elected to the District Court of Nassau County, and in 1995 he was elected as a Justice of the Supreme Court, State of New York.

In addition to his legal experience, Justice Bucaria has served as an Adjunct Professor, Long Island University at C.W. Post at the graduate level. Prior to that he taught at the University of Alberta, Edmonton, Canada, and SUNY, Farmingdale. He has participated in numerous invitational seminars held by the AEI - Brookings Institute in Washington, D.C. He has presided over Mock Trial Competitions, as well as Moot Court held at Hofstra University. He has been active in numerous legal, charitable and educational organizations during his career. He is a past president of the Catholic Lawyers Guild of Rockville Centre and a member of Colombian Lawyers, Friendly Sons of Saint Patrick, and Irish in Government. Justice Bucaria also is a member of the American College of Business Court Judges.

Further, since 1997, he has been active in the New York State Guard, where he attended numerous conferences, including the National Security Seminar for the United States Army, as well as the National Security Seminar for the United States Navy. He presently holds the rank of Brigadier General in the New York Guard, where he is Commander of the Army Division. Among his numerous awards and decorations, he has received the New York State Defense of Liberty Medal presented to those who served the State during the September 11, 2001 tragedy.