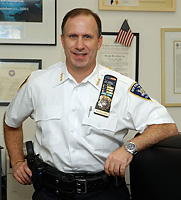 The New York State Court Officers Academy provides training programs for all court system personnel classified as “peace officers.” The Academy, under the command of Chief of Training Joseph Baccellieri, Jr., has a staff of full time court officers who are all certified as police instructors by the New York State Division of Criminal Justice Services. In addition, adjunct Academy instructors are utilized throughout the State to carry out various training requirements. These highly trained professionals are responsible for carrying out all court system training programs (statewide), many of which are required by statute.

Established in 1972 (view historical photos), the Academy is responsible for training approximately 4,200 court officers, as well as approximately 2,000 additional non-uniformed peace officers of the Unified Court System. In the beginning, court officers were trained in screening and other procedures by local-area police departments. Today the Academy certifies its own instructors as well as those from other agencies and police departments.

Additionally, a wide variety of in-service training programs are offered to court officers of all ranks. Specialized training is also conducted for units such as the Mobile Security Patrol (MSP), Special Response Team (SRT), the New York State Courts Ceremonial Unit, and various instructor level and “train-the-trainer” courses. The 140-hour Basic Peace Officer Training Course is given periodically for employees in the court clerk and court assistant positions, whose titles also are covered under statute as peace officers. One or more of our eight firearm ranges are in operation daily throughout the state to satisfy statute-mandated annual re-qualification for all court system peace officers who are authorized to carry a firearm.

The Academy’s range of responsibilities is increasing exponentially and will continue to do so as we constantly strive to meet the demands of the New York State Judiciary for the 21st century.